Interview with the Commune Chief 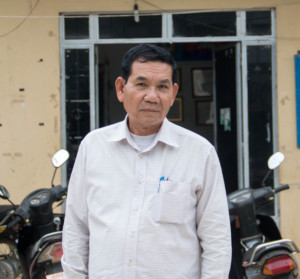 Saron has been the chief of Pheam Ek Commune since early 2018. In Pheam Ek there are eight villages (including Sous Ey, where CFI is located), two primary schools, a secondary school, a health care center and a police station. Most people in the commune work as farmers or construction workers or run small businesses.

We spoke to Saron to ask him about his experiences in the community and the ways that CFI has contributed.

CFI: When did you first start working with CFI?

Saron: In 2009 the commune chief at the time sent me to attend the grand opening of the CFI center so I’ve known CFI since then. But I only started working closely with CFI since I became commune chief. In early 2018 we worked together to resolve a situation where a father was abusing his child and we also worked on another case of a child who was abandoned by his parents. All these cases we can’t do without help from CFI.

C: What are the main challenges in your community?

S: The main challenges in the commune are poverty, violence and drugs. Some children who grow up in poor families, they don’t have money for school materials and they drop out of school.

C: What work have you seen CFI do in your community?

S: CFI provides school materials to children, provides scholarships to students, rice support to families every month, rent houses for families and kids and some budget for small businesses. Also, some families live far from CFI and the kids don’t have any transportation, so CFI provides bikes for kids to ride to school and also fixes them when they are broken.

C: Have you seen the difference CFI has made?

S: Some families can now afford to send their kids to school, and some families can solve their family life by having small business provided by CFI. Families are happy with their children’s education because after their kids finish class at public school they can have extra classes at CFI like English and Computer that they could not afford otherwise.

C: Could you tell us what you have heard from families?

S: They like to see their children doing activities with CFI like dancing and acting at the award ceremony. Families are happy and want CFI to continue to support them until they can help themselves.

About the Author: Sophannak Soun